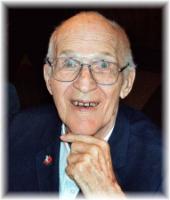 <h1>Edmund Nagel</h1> 1921  2006 Passed away peacefully at Forest Heights Long Term Care Centre on Wednesday, September 06, 2006, at the age of 84 years. Husband of Joyce (Steppler) and dear father of Carl Nagel and his wife Linda of Waterloo and Kevin Nagel and his wife Kathryn of Burlington. He will also be remembered by 2 grandchildren, Andrea and Veronica; step children Don Gross and Cathy of Waterloo; the Gross grandchildren and great-grandchildren; brother Joseph Nagel of Moose Jaw, SK and Hattie Gable of Winnipeg, MB. He was predeceased by his first wife Irene (Sjostrom);brothers Fred, Dan, Sig, Louie, Gus and Rudy Nagel, sisters Alma Nagel, Marie Dyer, Evy Lockrey, Hilda McClelland step-daughter Brenda Naylor and parents Emilia (Singbeil) and Ferdinand Nagel. Mr. Nagel was retired from Ball Brothers Construction where he had worked for 34 years. He was a long time member of the Waterloo Royal Canadian Legion Branch #530. Friends are invited to share their memories of Edmund with his family at the Erb &amp; Good Family Funeral Home, 171 King Street South, Waterloo, on Sunday, September 10, 2006 from 1:00 pm to 2:45 pm. The funeral service will follow in the chapel of the funeral home at 3:00 pm. Cremation has taken place and interment will follow in Memory Gardens. Condolences for the family and donations to the K-W Poppy Fund would be appreciated as expressions of sympathy and can be arranged through the funeral home, 519.745.8445 or www.erbgood.com In memory of Edmund, a tree will be planted through the Trees for Learning Program by the funeral home.