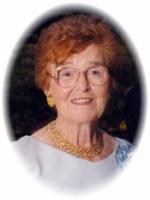 <h1>Janet Rush</h1> July 7, 1921  November 15, 2006 Janet died peacefully, surrounded by the love of her family, at Freeport Health Centre of Grand River Hospital, on Wednesday, November 15, 2006, at the age of 85 years. She is now in the presence of her Lord who she served faithfully through her life. She will be lovingly remembered by her dear husband George. As a loving mother, her memory will be cherished by her three children, John and his wife Wendy of Conestogo, Betty Anne and her husband Ken Behrns of Waterloo and David and his wife Melanie of Kitchener. She will be fondly remembered by her grandchildren, Heather, Sarah, Allison, Amy, Jennifer, Warren, Aaron, Nicholas and Emerald. Sister of Barbara Roth and Clarence and his wife Jean Kropf of Stratford, Elton and his wife Sylvia Kropf of Plattsville, Bernetta and her husband Ralph Ruby of Chatham, Mary Ellen and her husband Steve Gingrich of Zurich; sister-in-law of Selina Zehr of Milverton and remembered by many nieces and nephews. She was predeceased by her parents, Mary Anne (Lichti) and John Kropf and sisters and brothers, Irene Albrecht, Idella Leis, Mervin and Earl Kropf. Janet was a woman of strong faith who always put others ahead of herself. Friends are invited to share their memories of Janet with her family at the Erb &amp; Good Family Funeral Home, 171 King Street South, Waterloo, on Sunday from 2 to 4 p.m. and 7 to 9 p.m. The funeral service to celebrate Janets life and faith will be held at Faith Evangelical Missionary Church, 3849 King Street East, Kitchener, on Monday, November 20, 2006, at 10 a.m., with Rev. Richard Kopanke officiating. Interment to follow in Woodland Cemetery, Kitchener. Following the committal service at the cemetery, friends and relatives are invited to return to Faith Evangelical Missionary Church for refreshments and a time to visit with the family. Condolences for the family and donations to the Grand River Regional Cancer Centre or Faith Evangelical Missionary Church would be appreciated as expressions of sympathy and may be arranged through the funeral home, 519.745.8445 or www.erbgood.com In living memory of Janet, a tree will be planted through the Trees for Learning Program by the funeral home.