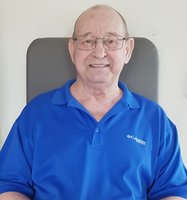 Passed away peacefully, surrounded by family, at Innisfree Hospice on Saturday, September 28, 2019 at the age of 75 after a 2 and a half years of battling cancer.

He is survived by his beloved wife Peggy of 54 years, his daughter, Sheri and her husband Rob, grandchildren, Kayla, Laura and Bobby (McKenzie) Soosaar, Samantha Andres (Douglas’s daughter) and great grandson Noah Andres.  He will be missed by many nieces and nephews. He is predeceased by his son Douglas, by his parents, Alfred and Irene Martin, his brothers, Lester, Howard, Orlan, Art, and Floyd.

He was a professional truck driver for over 40 years and enjoyed 13 years of retirement.  During his retirement he, along with his wife, enjoyed traveling through Canada and the United States in their fifth wheel.

He is long standing member of St. James Lutheran Church in St. Jacob’s where he was actively involved over the years in many different capacities.  He also volunteered with Habitat for Humanity on the salvage crew.  He enjoyed fishing at the French River with family and friends every June. He was an avid Ranger’s fan and could be found at the Kitchener Auditorium most Friday nights and Saturdays nights were spent watching the Leaf’s with a big bowl of popcorn.  When not in hockey season, he could be found watching the Blue Jays.  A true sports fan through and through!

“Gramps” was always the biggest fan at any of his grandchildren’s sporting events or dance recitals.  If they ever needed a ride anywhere, he was always the first to offer (this goes for his daughter as well).  Spending time with family and friends always brought a smile to his face and he enjoyed many Sunday Suppers this past summer with his grandchildren!

Condolences for the family and donations in lieu of flowers to St. James Lutheran Church, Habitat for Humanity or Innisfree Hospice may be arranged through the funeral home at www.erbgood.com or 519-745-8445.