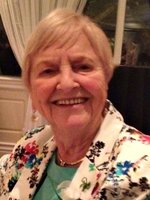 Consoled by the sweet strains of her beloved Scottish music and surrounded by more than a dozen family members, Hilda Beatrice Warrington (nee Clyde) passed away peacefully in her home in Kitchener, Ontario on Wednesday, November 27, 2019 at the age of 88. Hilda was born in Longueil, Quebec on June 10, 1931 to the late Nathaniel Clyde of Glasgow, Scotland, and Laura Wylie of Hythe, Kent, England. She will rejoin her incredible husband of 58 years, Kenneth George Warrington, who predeceased her in 2010. Ken and Hilda made their home in Montreal, Quebec City and Ottawa before settling in Kitchener in 1985. Hilda is also predeceased by brothers Richard "Dick",  Donald "Bill", and John Clyde, and Ken's brothers and sisters, Mabel (Mrs. Ted Jarvis), Fenton "Tubby", Chris (Mrs. Lomar Roy), Dot (Mrs. Newt Drake) and Lenny. She is survived by her very special sister, Elsie Voyce of Carleton Place, Ontario, and sister-in-law Hilda Warrington of Arundel, Quebec. She was a loving treasured Mom to Clyde (Janice Clarke) of Cambridge, Brian (John McGill) of Fergus, and Karen Lemoine of Elmira, and wonderful Nana to Stefan Lemoine (Tiffany), Laura Novak (Jeff), Ken “Paul” Lemoine (Caitlyn), Michael, Kirk and Katharine Warrington and Ian Lamourie. She was adored by great-grandchildren Conner, Alexis, Lana, Akéla and Nakos and numerous nieces and nephews who were very dear to her heart.

As expressions of sympathy, flowers are graciously welcome or donations to Calvary United Church, Kitchener-Waterloo Humane Society or Food Bank of Waterloo Region would be appreciated by the family. Special thanks to the LHIN for their compassionate care and to Hilda's wonderful, close friends who comforted and supported her over the past few months.