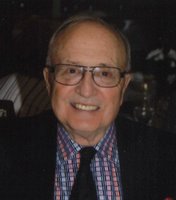 Justice Ronald Radley went home to be with his Lord on June 8th at the age of 87.

Ron graduated from Royal Military College in Kingston in 1955 (#3348) and from Osgoode Hall Law School in Toronto in 1959. He was a lawyer for 20 years in Ottawa and Toronto and served as an Ontario Provincial Court Judge in Toronto for 29 years. Ron volunteered as a Director and Big Brother with Big Brothers of Metropolitan Toronto for 25 years. He also volunteered with the Food Bank of Waterloo Region. Ron was on the Board of several Christian Missions and travelled throughout the world with his wife Miriam on annual mission trips to Africa, Asia, Mexico and Cuba for over 25 years. He attended the Peoples Church in Toronto for many years where he was an elder and more recently attended Waterloo Pentecostal Assembly in Waterloo.

A private family service was held. Cremation has taken place. Interment has been made in a niche at Parkview Cemetery Chapel, Waterloo.

Condolences for the family and donations to Waterloo Pentecostal Assembly or The Food Bank of Waterloo Region may be arranged through the Erb & Good Family Funeral Home, 171 King St. S., Waterloo at www.erbgood.com or 519-745-8445.