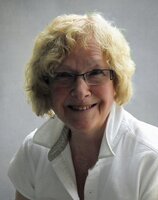 With heavy hearts, we announce the passing of Jane Esther Deer (née Halliwell) on August 18th, 2021 at Grand River Hospital in her 80th year. Jane was born in Cornwall, Ontario, on September 20th, 1941.

Jane is predeceased by her parents, Percy and Helen (Oliver) Halliwell, and is survived by her children Greg Deer (Maria Enqvist) of Winnipeg, Shawn Deer (Rhonda Gilson-Deer) of Waterloo, and Susan Deer (Clayton Blackbeard) of Toronto. Jane was a loving grandmother to Megan, Ethan, and Charlotte of Waterloo, and Scarlett of Toronto. She is also survived by her two siblings John Halliwell (Mary Lou) of Calgary, Margaret Halliwell (Don MacDonald) of Toronto, and was an aunt to many nieces and nephews.

Jane grew up in Cornwall and the family moved to St. Catharines when she was young. Jane trained at the Hospital for Sick Children School of Nursing in Toronto, where she established lifelong friends, and just recently attended the 55th Anniversary of her graduating class.

Jane loved to travel, and spent the years after graduation travelling and working in various hospitals. She always spoke fondly of the time she spent in Europe. Eventually she met and married Donald Deer, and they moved throughout Newfoundland and Quebec, and many other places before finally settling in North Bay, Ontario, to raise their family. Later on in life, Jane pursued a career change by attending Laurentian University in Sudbury, where she graduated with a Bachelor of Social Work. After which, she worked at Amelia Rising Counselling Centre.

She spent most of her life in North Bay, where she attended the First Baptist Church and then the United Church. There, she made many friends whom she stayed close with for the rest of her life. Their friendships bridged generations, as their children all became good friends.

Eventually, as her friends left North Bay, she made the decision to move to Waterloo to be closer to family. She moved into the Westhill Retirement Residence, where she made new friends, and her family was thrilled to have her so close, as it meant we could visit more.

Jane was a loving mother, daughter, sister, aunt, grandmother, and friend to many. She will be truly missed by those whom she leaves behind.

The family wishes to thank Dr. Gregor from the Grand River Renal Clinic, and the many doctors, nurses, and support teams at the Intensive Care Unit at Grand River Hospital for their support and care.

Donations to the Kidney Foundation or Diabetes Canada would be greatly appreciated and can be arranged through the Erb & Good funeral home at www.erbgood.com or 519-745-8445.