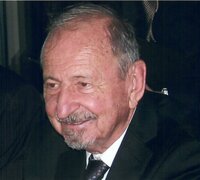 Passed away with his sons by his side on Tuesday, February 15 at St. Mary’s Hospital 6 days after his 92nd birthday.  Maurice was born February 9, 1930, in Oshawa, Ontario to William and Millie.  He is survived by Laura, his beloved wife of 68 years and his sister Elsie Osadetz (Carl) of Edmonton.  Daughter Lynn Freure (David) passed away far too soon at the age of 52 in 2006.  He will be missed by sons Glenn (Julie) and Robert (Sherry), grandchildren Eric (Jennifer), Kristen (Hazhaar), Karen (Dan), Mark (Michelle), Jenna, Kayla (Adrian) and Danielle and great-grandchildren Kaitlyn, Sarah, John, William, Michael, Daniel, Hannah and Sierra.  Maurice was a principal in Waterloo Region at Wilmot Senior, Hespeler Public, Margaret Avenue and N. A. MacEachern schools retiring in 1992.  In retirement Maurice and Laura wintered in Florida for a number of years and then took up cruising going on over 30 cruises.  Cremation has taken place with interment to follow at Williamsburg Cemetery.