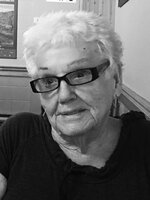 Survived by five daughters and one son, Brenda, Bonnie, Pat, Bryan, Judy and Karyn. Also, two sisters and one brother in BC. Linda has 23 grandchildren and 31 great-grandchildren.

Linda accepted the adventure of motherhood, not only raising seven children, but somehow getting them to all sing together. The family moved from Saskatchewan to Goshen, Indiana in 1962.

She moved to BC in 1993, got remarried, then moved to Waterloo, Ontario in 2010 after her second husband passed away. Two daughters and six grandchildren were living in the Waterloo area at that time.

Her last year was spent with a grateful spirit at Parkwood Seniors Community.

Cremation will take place here locally and a memorial service is planned in Indiana at a future time.

Condolences and/or memories for the family may be arranged through the Erb & Good Family Funeral Home, 171 King Street S., Waterloo at www.erbgood.com or 519-745-8445.