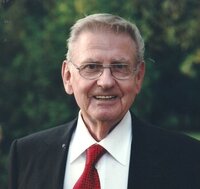 It is with deep sorrow that we mourn the passing of Adrian Schipper on the afternoon of Wednesday, July 27. Adrian was 91 and died of natural causes, and a broken heart, one month after the passing of his wife.

Predeceased by his wife of 60 years, Frances Schipper, Adrian is survived by his children, son Dirk Schipper and his wife Jennifer Schipper, daughter Adrienne Meinzinger, and his granddaughters Alexandra and Erin Meinzinger.

Adrian immigrated to Canada from the Netherlands in the late 1950’s. He was an entrepreneur who started and ran a successful manufacturing business, first in Woodstock, then in Waterloo, contributing to the local economies and keeping many people employed. He was an avid golfer, who played regularly in Men’s Leagues at his home in Baden, ON and, in the winter months, at his second home in Naples, FLA.

Thank you to the Doctors, Nurses, PSW’s and staff at both Columbia Forest Long Term Care, and The Westhill Retirement Residence for taking care of Adrian in his final years.

Condolences for the family and donations to Grand River Regional Cancer Centre, and Hospice of Waterloo Region, may be arranged through the funeral home at www.erbgood.com or 519-745-8445.