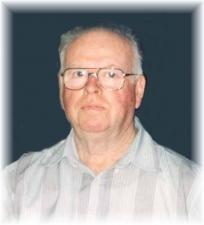 Harvey died peacefully, after a lengthy illness, at Pinehaven Nursing Home in Waterloo, on Thursday, November 16, 2006. He was 81.

He was predeceased by his beloved wife Muriel (Nelson), June 28, 2004. Dear father of Kevin and his wife Hilda Brooks of Waterloo and Joanne Brooks of Pembroke. He will be lovingly remembered by his grandchildren, Katelyn Ott, Matthew Ott, Emily Ott, Ashely Brooks and Adam Brooks. Brother of Jean Fitzpatrick, Olive Krumm and Gordon Brooks.

He was predeceased by his parents, Isabella (Scott) and Willard Brooks; brothers Charles, Clarence and Ben Brooks and sister Rose Cordick.

Harvey was a veteran of the Second World War serving with the RCAF, a member of the Royal Canadian Legion Branch 134 in Mount Forest, First United Church in Waterloo and retired from Imperial Tobacco in Guelph where he worked for many years.

Friends are invited to share their memories of Harvey with his family at the Erb &amp; Good Family Funeral Home, 171 King Street South, Waterloo, on Sunday from 2 to 4 p.m. and 7 to 9 p.m. The funeral and committal service will be held in the chapel of the funeral home on Monday, November 20, 2006, at 11 a.m., with Rev. Richard Hawley officiating.

Following the service, friends and relatives are invited to the Fireside Reception Room of the funeral home for refreshments and a time to visit with the family.

Condolences for the family and donations to Heart and Stroke Foundation of Ontario would be appreciated as expressions of sympathy and may be arranged through the funeral home, 519.745.8445 or www.erbgood.com

Harveys family would like to extend their heartfelt thanks to the staff at Pinehaven Nursing Home for the excellent care given to him during his stay there. We would like to express a special thank you to Lucy and Dr. Pope for their care and compassion during his illness.

In living memory of Harvey, a tree will be planted through the Trees for Learning Program by the funeral home.

Services for Kenneth Brooks
There are no events scheduled. You can still show your support by sending flowers directly to the family, or planting a memorial tree in memory of Kenneth Brooks.
Visit the Tribute Store