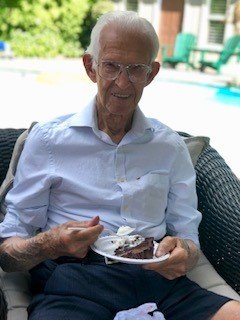 Passed away peacefully, on Sunday, March 10, 2019 at Freeport Health Centre at the age of 96 years.

Friends and relatives are invited to share their memories of Hugh during visitation at the Erb & Good Family Funeral Home, 171 King Street South, on Thursday, March 14, 2019 from 2-4 pm and 7-9 pm.  The funeral service will be held in the chapel of the funeral home on Friday, March 15 at 11am. Reception to follow in the Fireside Reception Room.  Interment in Greenfield Cemetery, Arthur at a later date.

In lieu of flowers, condolences for the family or donations to the Grand River Regional Cancer Centre may be arranged through the funeral home www.erbgood.com or 519-745-8445.