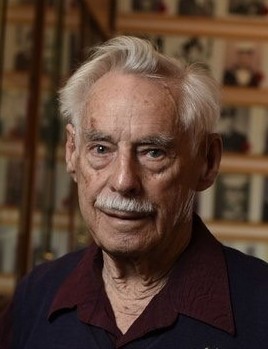 Peacefully and with his family by his side, Jack passed away at the age of 95 on Tuesday, July 16, 2019 at Cambridge Country Manor.  Jack was a beloved father, grandfather, great-grandfather, ringette enthusiast, proud Canadian Naval Veteran of WW2, friend, and neighbour.

Jack is predeceased by his beloved wife Lorna and will be greatly missed by his children, David (Waterloo), Cathie and Mike (Waterloo) and Linda and Martin (Milton), grandchildren Katelynn (Christopher), Lindsay (Rene), Nicole, Emily and Josh, great-grandchildren Liam, Declan, Chloe and Eloise, sister-in-law Dorothy Mathews, seven nieces and nephews and their families, his Ringette Family, Navy Club friends, and all who knew him, especially Tom Greer, Ian Faulds and Janet Lanteigne.

Jack enlisted in the Canadian Navy at the height of WW2 and bravely served his country before returning home to Toronto where he met his future wife Lorna.  Jack made his career with Canadian General Electric which took him to Waterloo where they settled down to raise their family and became fixtures of the ringette and navy club communities for over 50 years.  He was an avid photographer and took pride in having his pictures published.

Many thanks to Cambridge Country Manor and all the wonderful staff for their kind and loving care of Dad over the last several months, the Waterloo LHIN network for all their help and support, Meals On Wheels and More, Dr. Dawood and his staff, Dad’s amazing and supportive neighbours on Union Street, and Erb & Good Funeral Home for their assistance and care.

A Celebration of Jack’s life will be held at the Kitchener Waterloo Naval Association, 315 Weber St. N., Waterloo on Sunday, September 8, 2019 from 10 a.m. to 2 p.m. with Service at 11 a.m.  Refreshments to follow.  Condolences for the family and memorial donations to the KW Poppy Fund, Meals On Wheels and More (Community Support Connections), or any donation to children’s sports may be arranged by contacting the Erb & Good Family Funeral Home, 171 King St. S., Waterloo at www.erbgood.com or 519-745-8445.

We will think of him whenever we have a cup of tea, hit the rink, help a neighbour, or wear a poppy.  He was truly an exceptional man and one of the best.