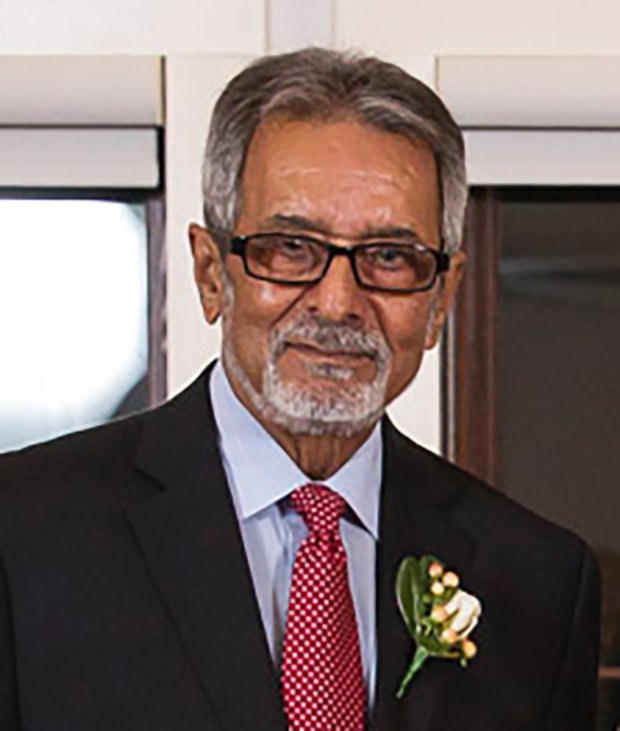 A native of Mbarara, Uganda, and a resident of Kitchener since 1975, Sadru Jamal died peacefully in his 79th year at Grand River Hospital on Sept. 3, 2019. Sadru, survived by his wife of 54 years, Habiba, and their three children – Shamir (Pia), Saj (Joanne) and Tasneem (Craig) – was welcomed to Canada along with thousands of other Ugandan Asians in the wake of ethnic purges conducted by dictator Idi Amin in the early ‘70s. Stripped of his house, possessions, and business, Sadru, a mechanic by trade, rebuilt his life, and that of his family, in Canada, opening a Texaco garage on King Street East. Later he sold the business and opened another garage and gas bar, Country Hills Automotive on Rittenhouse Road.
Sadru loved golf, entertaining, his friends and his adopted country. But above that he loved his family – wife Habiba, their children, eight grandchildren and two great-grandchildren.

Condolences for the family will be received at the Lawrence Ave. Mosque, 299 Lawrence Avenue, Kitchener on Thursday (Today), Sept. 5, 2019 at 8:15 pm.  The Funeral Ceremony and last respects will be held at the Mosque on Friday, Sept. 6 at 12:15 pm.

In lieu of flowers, condolences and donations to the Heart and Stroke Association of Ontario may be arranged through the Erb & Good Family Funeral Home, 171 King Street South, Waterloo at www.erbgood.com or 519-745-8445.

Condolences for the family