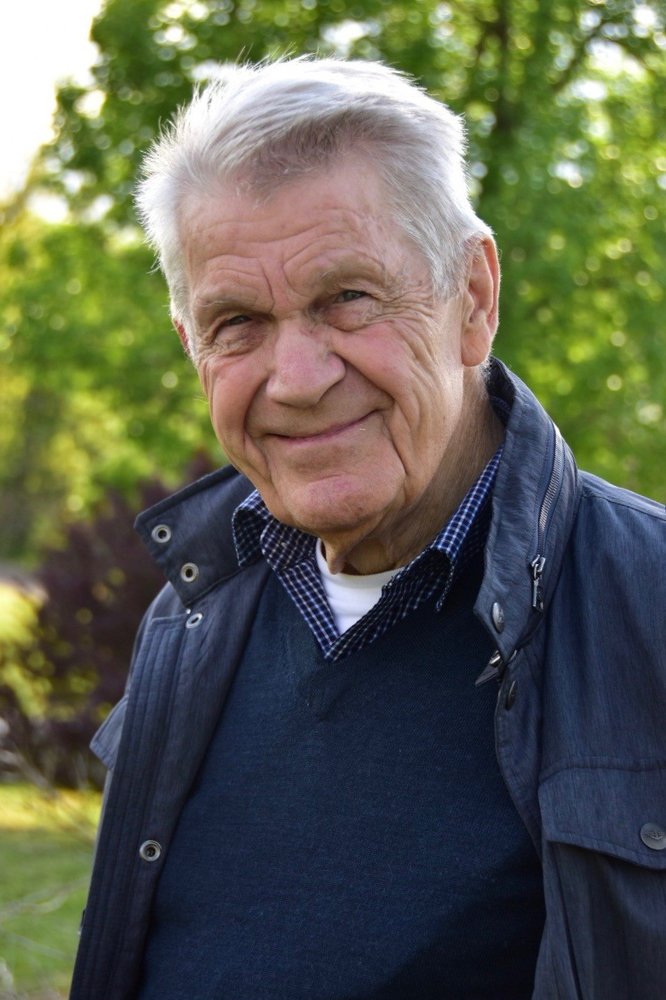 Frits Roos, 82, of Waterloo passed away at home on January 14, 2020. Survived by: his wife of 58 years Donna Gallant Roos; children Katherine (Craig), Patricia (Jim), Harriet, Rick (Denise) and Chris; sister Antonia Buimer (Roel) and sister-in-law Irene Roos-Blok of the Netherlands; brothers-in-law James Gallant and Richard Gallant of St. Stephen, New Brunswick; grandchildren Madeleine, Aurora, Charlie, Abi, Jake, Blaise, Anna, Jasper, Naomi and Julia; and, extended family in Canada, the Netherlands and Sweden. Predeceased by parents Frederika (Rika) Christina and Johannes Antonius (Antoon) Roos, brother Willem Roos and brother-in-law Gerald Gallant. Frits was born in Amsterdam on May 8, 1937, his early childhood spent in occupied Holland during WWII, an experience that made him a life-long scholar of modern and cold war history. Following military service, he studied at the University of Amsterdam, began his writing career at Het Vrije Volk in Amsterdam and finished his studies at Carleton University, Ottawa. Always a traveller, the hitchhiking trips of Frits’ youth took him from the jazz clubs of Paris, to Denmark, where he met the Canadian fellow-traveller he convinced to marry him. He and Donna lived in The Netherlands for a year, then chose to come to Canada, living first in Carleton Place, then Ottawa, Toronto, and eventually Waterloo, Ontario. His years of driving 5 children to music lessons and sports events dovetailed with his own love of music and “football” – not to mention the chance to read a book in any quiet moment while he waited for lessons to finish. Frits will be remembered by many as a career journalist who, after stints with Canadian Press in Ottawa and Toronto, worked most of his career at the Kitchener-Waterloo Record. From beat reporter to editorial writer, and finally editor of the Editorial and Opinion section, he helped solve the problems of the world, nation and region before 11am every day! In mid-life, Frits and Donna travelled much, exploring North America as well as new and favourite destinations like Turkey and Portugal, where they spent 14 winters. As life slowed down, Frits occupied himself with his carefully curated book collection and European football at any hour of the day or night. His greatest pleasure came from watching his 10 grandchildren grow and blossom. “I am a rich man,” he would say. “Tot ziens Opa.” A memorial service will be held at 10:30 a.m., at the Erb and Good Funeral Home, 171 King St S, Waterloo, on Saturday, January 25, followed by a reception. Visitation will be held at the Funeral Home on Friday, January 24 from 2:00 p.m. to 5:00 p.m. In lieu of flowers, donations may be made to a charity of your choice.
To plant a tree in memory of Frederik (Frits) Roos, please visit Tribute Store
Friday
24
January

Share Your Memory of
Frederik (Frits)
Upload Your Memory View All Memories
Be the first to upload a memory!
Share A Memory
Plant a Tree