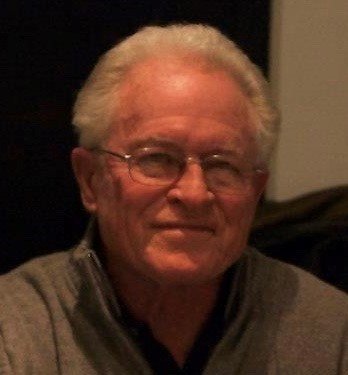 Dave Thomas passed away at Grand River Hospital on Thursday May 14, 2020 at the age of 81 with his wife at his side. He is survived by his wife, the love of his life, Barbara, his beloved children Shellie (Jim), Peter (Kelly) and his cherished granddaughter Meredith. Also survived by his dear sister Bobbie, her family, Michael (Alicia), Robin (Bryn), Andrew, Jennifer; Kevin (Lisa), Sahra; Jill, Kathleen (Chris), Nicole, Denise, and Dave.

Predeceased by his parents Robert and Anne Thomas, his parents in-law Verna and Elvin Lamb, his brothers in-law Ron Lamb and Richard Hutchings.

Dave was born in Hamilton, where he completed his school years, started his working career at the Hamilton Spectator, began his lifelong interest in judo, and met and married Barbara.

In 1962, they moved to Kitchener for his job in the composing room at the at the K- W Record, where he worked for 33 years, retiring as a copy editor and where he was known for the witty word play in his headlines. It was at the Record that Dave met his close friend Al, and by extension his wife Marilyn, and an enduring friendship was born.

Dave pursued his love of Judo, attaining his fourth degree black belt and instructing at local universities, high schools, community centres and local judo clubs. There were many times he was approached by an adult person who told him how much they had enjoyed learning judo from him as a child. Faced with declining health issues, Daveʼs friend from Judo, Ken, made sure he was able to go to his club for as long as possible until, at the age of 75, Dave said his goodbyes to the sport he loved.

His other sport was tennis. His interest started in his thirties and after retirement he played almost daily, becoming a charter member of the Doon Tennis Club and then transferring to Northfield.

Dave loved having a convertible car. The first was a bug-eyed Austin Healy Sprite purchased in 1960. It was so much fun going on car rallies with sports car friends and just driving the country roads, with the wind blowing through Daveʼs hair. As the children came along no more convertibles. Sensible cars were required, but in retirement it was back to the convertibles that he loved. Combining his interests, he could be seen driving to the tennis club in his convertible with the top down as early possible and of course his vanity plates said SENSEI T (judo had to be in the mix).

Dave really enjoyed the first family home on Ruskview Road, a neighbourhood full of young families all starting lifeʼs journey. Lots of parties, barbecues, births, weddings, and everyone helping each other when in need, erecting sheds and fences together, looking after each other’s children. These neighbours became lifelong friends.

Vacations at Bayview Wildwood on Sparrow Lake were an important part of his life. This started with his own family when he was a child and was revisited for a decade when Shellie and Peter were young and once again for a further decade when Meredith came along. Three generations of memories, of boating, fishing, tennis, bocce ball, eating in the dining room, dances, snakes, birds, friends that you met up with once a year, every year. Fun, fun, fun. He loved it all.

The most important thing in Daveʼs life was his family. Barbara, Shellie and Peter came first, before his work, before his interests. He was a hands-on Dad right from the start. He was the one who heard the cries first in the middle of the night, he was the one who was the first on the scene for injuries or sickness. When Shellie and Peter became involved in gymnastics, he paused his time with judo, became a certified gymnastic coach and spent his time coaching and taking them to classes and tournaments.

His sister, Bobbie and her family were very special to him. The vacation with Bobbie and Dick to Ireland was a particularly great memory, along with our wonderful family Christmas dinners.

Dave had a passion for multiple genres of music, which started with his love for the blues. While he liked all types of blues, the Chicago style was his favourite, with Muddy Waters and Howlinʼ Wolf topping the list. He was also fond of Sonny Terry and Brownie McGhee, who were two great examples of the Piedmont style of blues. There is a Muddy Waters song that says “well you know the blues got pregnant, and they named the baby Rock & Roll”, and Dave firmly held this opinion, leading to his love of rock and roll. He often said that when he first heard the “Bo Diddley beat” he felt that he was transported to Africa and often performed the hambone, slapping and patting his arms, legs, and chest to Boʼs rhythms. Other rock and roll favourites included Elvis Presley (mostly the Sun sessions), Chuck Berry, Fats Domino, Little Richard, and Jerry Lee Lewis, to name a few. If it is true that the blues can be considered the mother of rock and roll, then it can also be said that country music was the father. Dave loved Hank Williams as a young child, and he knew the lyrics to his songs even as his dementia was accelerating. Dave was also a big fan of Johnny Cash and other country musicians. Finally, Dave enjoyed Irish folk music, singing Clancy Brothersʼ songs to Shellie, Peter and Meredith when they were children, who play and sing them to this day.

Daveʼs health started to decline as he dealt with multiple issues. Life was adjusted to spend more time with family and friends who rallied around to support him. Peter came to take him to the gym in our building, and play the songs that he loved, and Kelly brought his favourite dinners (most favourite - devilled eggs).

There were many visits to Toronto to Shellie, Jim and Meredithʼs home, where a special room called Daveʼs Cave was made for him. Dave was fond of the mini- vacations we took with Shellieʼs family, as well as the excursions to the Shaw and Stratford festivals.

Friends invited him to dinners and to their cottage and he looked forward every Friday night to fish and chips with Dorothy and John.

Dave enjoyed the Seniors Program at the ARC; he loved the staff and the activities and the friends he made there.

Dave adjusted to the limits his health put-on him with good humour, with dignity, and with love to everyone who became part of his life.

He loved his life, his family, and his friends. He was much loved by his family and friends. We will miss him.

There will be a celebration of life at a later date, when we can all be together.

Condolences for the family and donations to Diabetes Canada or Alzheimers Society may be arranged through the Erb & Good Family Funeral Home, 171 King Street S., Waterloo at www.erbgood.com or 519-745-8445.

Share Your Memory of
Dave
Upload Your Memory View All Memories
Be the first to upload a memory!