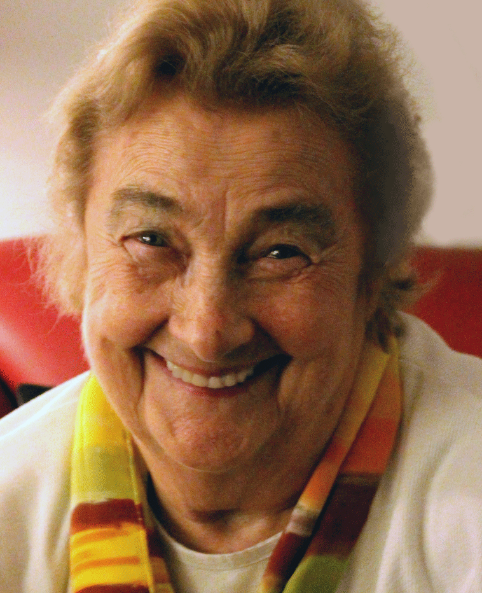 With characteristic dignity and grace, Ilga Niedre Gravelsins, truly a Force of Nature, passed from us on September 8, 2020, in her Kitchener home and her son Davis’s arms, lucid as ever. Creative, always thoughtful and reflective, but certainly vigorous in her convictions, Ilga nourished us with level-headed resilience and her resonantly open heart. Loving each member of her family and extended family fiercely and generously, she used her natural sparkle and resolute drive to make sure each of them flourished. The youngest of Kārlis and Mārta Niedre’s four children, she was born on October 13, 1926 at Blomes skola, in rural Vitrupe, into the blossoming hopes and determination of newly independent Latvia. She began to read at age 4, and remained passionate about books and learning throughout her life. At the Riga Art Institute, she studied textile design, having learned hand-loom weaving at her mother’s side. Ilga left her parents and their beloved home sorrowfully, at age 17. Kārlis and Mārta insisted that their beautiful daughter flee the imminent Soviet military reoccupation of Latvia, staying behind themselves to await the return from German military conscription of their three sons. Two of Ilga’s brothers did return; they were promptly arrested by Soviet authorities and deported to Siberian gulag prison camps.

Emerging, as if by a miracle, physically unharmed after Allied bombs levelled the building and entire district of Leipzig, Germany where she had stopped temporarily on her quest for a safe future, Ilga continued westward, to Munich and a United Nations camp for "displaced persons (DP's)." After five years in refugee limbo, too often fed inedible "green monster" pea soup, Ilga jumped at the opportunity to leave war-scarred Europe and immigrate to Canada for a 12-month DP work contract as a domestic servant in an upper-class Montreal household. An assembly-line job at an apparel factory followed. Tipped to an opening at Montreal's leading textile studio, there she quickly became the business's chief designer and production manager, impressing clients such as Air Canada and the Bank of Montreal with custom-designed fabrics for upholstery and curtains. In November 1953, at a dinner party hosted within Montreal's small Latvian DP diaspora community, Ilga met John (Jānis) Gravelsins. It literally was love at breathless first sight. John had finished his DP labour contract at a northern Quebec gold mine and, with an English dictionary close at hand, was pursuing a degree in Mechanical Engineering at McGill University, from which he would graduate with high academic honours. With a guest list of two – their witnesses – Ilga and John married in May 1954, in McGill's non-denominational Birk's Chapel; they spent their honeymoon in the backyard of their rented lodgings. Their bliss would bring them three sons, Rob, Davis, and Harald, whom they raised in leafy, suburban Roxboro, in a house whose 1959 purchase price, $18,000, stretched their finances for years to come.

The limitless joy Ilga and John found in their life together, a life created entirely from perseverance, hard work, thrift, humility, dreams, and loving faith in each other and in their children, was particularly evident during August family vacations on Prince Edward Island, in celebrations of Ziemsvētkus (Latvian Christmas/winter solstice), during weekend day trips, for example to the Laurentian Mountains, and in the colours dancing and singing with so much delight in Ilga's flower beds. In 1996, after John's retirement, Ilga and John relocated to Kitchener, to be closer to their sons and grandchildren. After John's passing in 2000, Ilga valiantly carried on by herself in their Kitchener home. Year-round in Kitchener, until two days before her passing, Ilga could be seen taking daily walks along Keewatin Avenue, down to the Grand River, and up Ottawa Street, always offering smiles and greetings to neighbours and passersby, and constantly awed by the changing seasons parading through the nearby Lackner Woods. The Monday and Thursday morning aquabics sessions at the Lyle Hallman pool have two fewer hands waving joyfully from below to the powers above.

But flowers distilled, though they with winter meet,

Lose but their show; their substance still lives sweet.