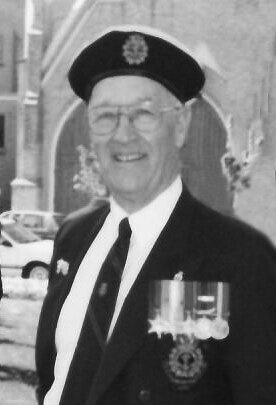 Predeceased by his parents and sisters Marguerite Woelfle and Geraldine (Jim) Bauman.

Don was born in Preston, Ontario on February 10, 1925 to Ralph and Kathleen Woelfle. Don joined the Merchant Navy in June 1942 and served on the High Seas as a Gunner on three Merchant ships (Alder Park, Stanley Park and Noranda Park) during World War II. After his three years in the service, Don returned home and married Verna (nee Dmytruk). He worked in the brewery industry for 38 years (Carling Brewery / Labatt’s Brewery). He was a member of the K-W Naval Association and The Royal Canadian Legion, Branch #530, Waterloo.

Don was a very proud Veteran who held the courage and commitment to serve for Canada in the Second World War, as a D.E.M.S.

Cremation has taken place. A private family graveside service will be held at Parkview Cemetery, Waterloo.

Condolences for the family and donations to the KW Poppy Fund may be arranged through the Erb & Good Family Funeral Home, 171 King Street S. Waterloo at www.erbgood.com or 519-745-8445.

To send flowers to the family or plant a tree in memory of Donovan "Don" Woelfle, please visit Tribute Store

Cremation has taken place. A private family graveside service will be held at Parkview Cemetery, Waterloo.

Share Your Memory of
Donovan "Don"
Upload Your Memory View All Memories
Be the first to upload a memory!
Share A Memory
Send Flowers