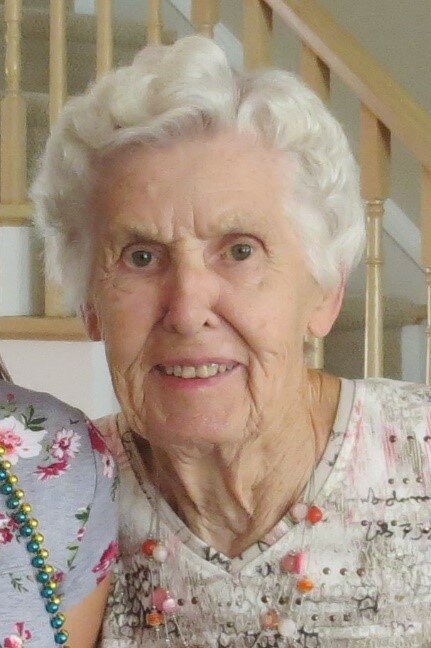 Cremation has already taken place and, as per Joyce’s wishes, no memorial service is planned. Interment will take place beside her husband Earl in Barrie Union Cemetery.

Born on the family farm in Roebuck, ON, March 8, 1924.  Predeceased by her husband Earl Brydges in 2013, a former principal at Barrie North Collegiate (1962-1978).  Survived by her daughter Helen (Gregg Andrews) of Oakville, granddaughters Caitlin Murphy (Jason Murphy) of London and Carolyn Andrews of Oakville, her son Graham (Ruth Neufeld) and granddaughters Allison Brydges and Sarah Brydges all of Waterloo.  Mom was grateful to hold her first great-granddaughter Maeve Brydges Murphy of London for the first time, in the weeks prior to her passing.

Joyce met her husband Earl in Ottawa during the war years, and they married in 1948.  They moved to Barrie in 1952.  She was active in the women’s guild of Trinity Anglican Church in Barrie and worked at various fabric and women’s wear stores.  Joyce had learned to sew at an early age, was extremely proficient at it and loved sewing anything and everything for her family.  As well, in her retirement years, she enjoyably put these skills to good use to alter brides and brides-maids dresses and sew quilts for Ronald MacDonald houses. Joyce raised money for the Horticultural Society of Barrie for many years.  Joyce and Earl were lifelong square dancers and spent 15 winters at their home away from home in Pharr (McAllen), Texas, the square-dancing capital of America. They also travelled extensively and owned a series of motor homes.  Joyce moved to Waterloo in September 2017 and continued to independently live at Westhill Retirement Residence until her death.  Mom was a wonderful mother and homemaker, both optimistic and determined, and had a genuine interest in the welfare of family, friends and neighbours.

Cremation has already taken place and, as per Mom’s wishes, no memorial service is planned.  Interment will take place beside Earl in Barrie Union Cemetery.

Share Your Memory of
Joyce
Upload Your Memory View All Memories
Be the first to upload a memory!