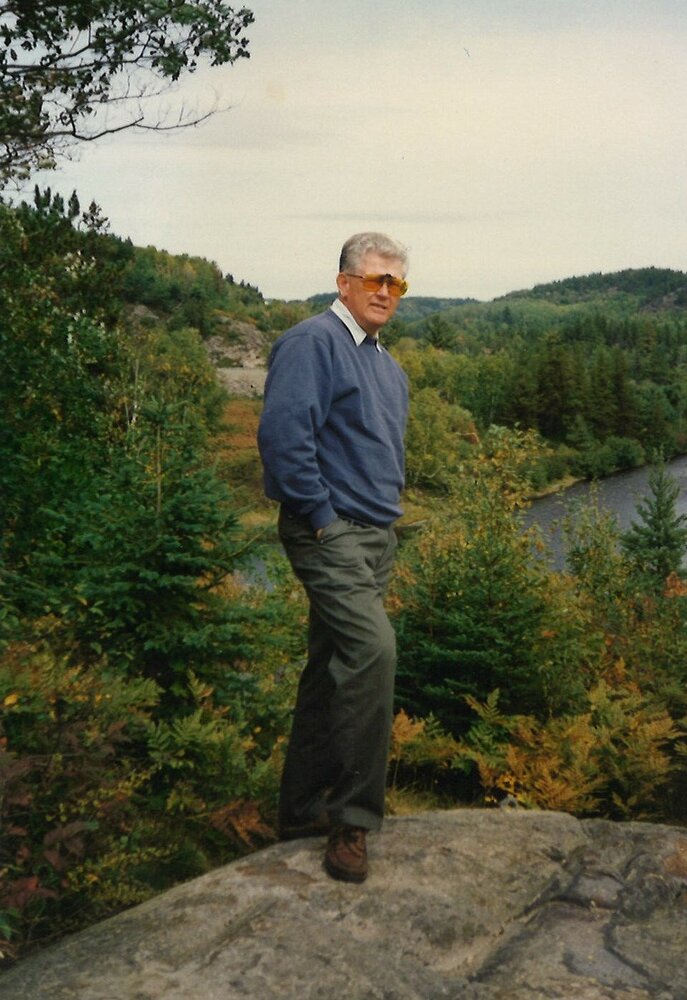 Devoted husband for over 60 years of Marilyn (Lyn) who died in June of this year. Survived and remembered with love by daughter Heather (Rob), son Scott (Celia) and brother Arthur (Janet). Son of William Merrill and Helen (Kay) Prudham. Brother-in-law of Janis (Pointon) and Rob Matheson. Fondly remembered uncle of niece Laurel, and nephews Brian, Keith, Kevin and Craig.

Wil (as he liked to be called in retired life) was born at Grand River Hospital in Kitchener, but lived for most of his life in Owen Sound and Sauble Beach, cottaging at Leith in his youth and at Sauble as an adult. Wil and Lyn relocated to Sauble Beach on a year-round basis subsequent to their retirement. In 2003 they moved to Doon Village in Kitchener before taking up residence at Waterpark Place in Waterloo. They spent recent winters in South Carolina and in Florida.

Wil was an elementary and secondary school teacher and concluded his career as a principal in several Grey County high schools, including West Hill Secondary School in Owen Sound. He was a past-president of the Owen Sound Minor Hockey Association. In retirement, Wil became an avid cross-country skier, hiker, and cyclist. He volunteered to build and maintain ski trails for the Sauble Beach Cross-Country Ski and Snowshoe Club. He also helped the Federation of Ontario Naturalists with the construction of a boardwalk in the Petrel Point Nature Reserve on the Bruce Peninsula. Wil enjoyed canoe trips with Arthur, Heather, Rob, and Scott in various combinations and was always a “gamer” when it came to camping. Wil and Lyn were supporters of the Bruce Trail Association and of RARE, and Wil walked the entirety of the Bruce Trail in instalments as a retiree.

Wil was a member of Ontario Nature (K-W chapter) and the Willow Street Condo Recreation Committee. Wil and Lyn enjoyed OHL hockey, following first the Owen Sound Attack and, after moving, the Kitchener Rangers. They also loved birding and golf. Wil (mostly without Lyn) followed college basketball and football and was a committed fan of the Canadian Football League. Right to the end of summer 2021 Wil rode his bike on every sunny, warm day, whether in Kitchener- Waterloo or Florida. To the amazement of his family and friends, Wil camped at Silent Lake Provincial Park at age 82, just 5 weeks after the loss of his life partner.

Special thanks to the doctors and nurses of Grand River Hospital and St. Mary’s Hospital for their help, support, care, and compassion during Wil’s brief illness.