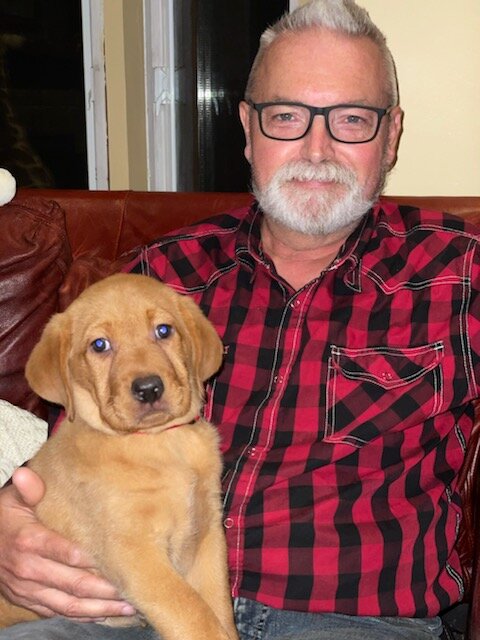 It with great sadness that the family of Devin Andrew Dalton announce that, with his family by his side, he passed away peacefully on November 14, 2021, at Princess Margaret Cancer Center, after a battle with cancer. Born March 29, 1960, Devin is survived by his sister Susan (Antero Elo). He will be missed by many friends and family.

He is predeceased by his parents Benjamin (Ben/Bill) James Dalton and Dorothy Jean (Sinnicks) Dalton.

Devin was an accomplished multitalented person whose good looks and sly humour always attracted people to him. After deciding that his Bachelor of Science was not where his heart lay, he attended Wilfred Laurier University where he enrolled in the music program and studied vocal music.  After enjoying his time on the stage in high school productions as well in Waterloo Regional Gilbert and Sullivan Society productions, Devin decided to take a chance and audition for what became Toronto’s longest running show, Phantom of the Opera. Drawing on his talent and versatility, Devin became a swing, who understudied several different roles.

After Phantom completed its run, Devin returned to university to earn a Bachelor of Education. He was a teacher for the Toronto District School Board where he taught at Second Street Public School and Market Lane Public School. He loved his students, and he deployed his creativity imagining fun ways for his students to learn new concepts.

A complicated person, we will always remember Devin for his kindness and generosity of spirit. Devin would never do or want anyone to do something that would hurt another. An accepting soul, Devin was a confidante to many, who they could count on for his counsel and support.  A keen observer of details, Devin loved creating moments with just the perfect touch.  Despite all this, Devin also struggled with depression for many years, a source of much pain for him.

In the last three years, Devin returned to his love of horses and horseback riding. Recently, despite his illness, he was able to fulfill a long-held desire to ride horseback over the Continental Divide in the Canadian Rockies.

Devin’s sister Susan and many friends and family, wish to thank the staff at Princess Margaret Hospital and especially the care team in 16P who tended Devin on the last leg of his journey.  Devin felt the staff on 16P were the most compassionate, caring and kind individuals he had ever met.

Relatives and friends must RSVP at www.erbgood.com or by calling the funeral home at 519-745-8445. To protect from COVID-19 and at the family’s request, masks are mandatory, and proof of vaccination will be required. Visitation will be held at the Erb & Good Family Funeral Home, 171 King St. S., Waterloo on Saturday November 27, 2021, from 11 – 1:45pm. The Funeral will follow in the funeral home chapel at 2pm. Family and friends are invited to view the livestream of the funeral service on his online obituary page (www.erbgood.com). Those in attendance will be welcomed to share their short, prepared memories of Devin. There will be a reception following. Private interment will follow at a later date.

In lieu of flowers, Devin requests you consider a donation to one of the following: Princess Margaret Palliative care unit, the Canadian Cancer Society, or OK2BEME (a KW counselling service for LGBTQ+ teens) and can be arranged through the funeral home at www.erbgood.com or 519-745-8445.

Share Your Memory of
Devin
Upload Your Memory View All Memories
Be the first to upload a memory!