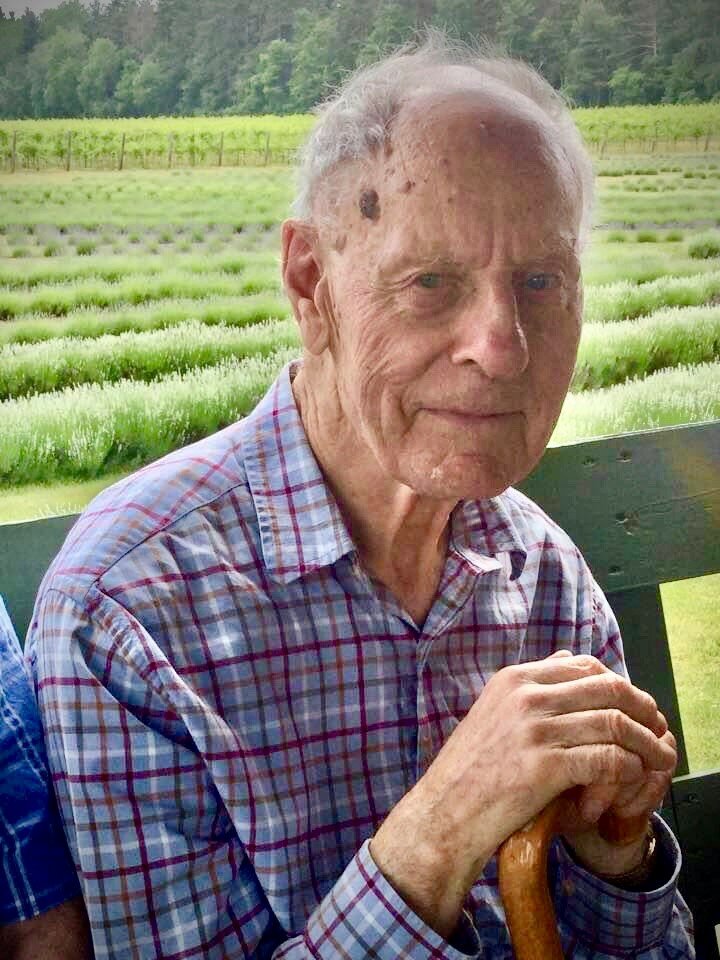 “Home is the sailor, home from the sea”

Ken embarked upon his final journey early Sunday morning, November 21, 2021, as a splendid sun was rising, a new day dawning.

Born in East End London on January 9, 1922, Ken was the first born of ten children to Cecil Norman and Ada Emmaline. He is survived by one brother Donald, in England, and by his daughter Elisabeth.

Ken proudly served in the Royal Navy for five years from 1941-1946. During that time, he met his beloved Käthe (2011), in South Africa while his ship was docked for repairs. Subsequent to two weeks in port there followed six years of letters exchanged. Ken never tired of telling the love story that was uniquely theirs. Together they had two sons, Martin (2020) and Colin (1977) and daughter Elisabeth, Ken taught in England, South Africa, Palmerston, Harriston, and K-W, retiring as Assistant Head of the English Department at WCI in 1978, and from the Writing Clinic at U of W.

Ken enjoyed both playing and coaching soccer; he was a founding member of Kitchener Minor Soccer, along with Eric Boehmer and Jim Millar.

Ken’s life echoed words spoken by his mother “we are put here to help each other.” He was a passionate advocate and tireless volunteer for mental health initiatives and supportive housing. He served on the Board of Directors of Mental Health, Waterloo Region for many years, receiving both local and national recognition. Along with Käthe, he co-founded a local chapter of the support group: Family and Friends.

Ken enjoyed a good cup of tea, his favourite tweed jacket, and daily walks with a succession of corgis. He journeyed bravely with Alzheimer’s and enjoyed living in the community at Parkwood Mennonite Home these past 12 years, particularly his companionship with Delbert Blake. He enjoyed daily walks from there through Rim Park and beyond, weather permitting, and latterly to the pond up to Thanksgiving Day.

To remember Ken, shine a light in the dark. Join him in giving thanks: for the renewed inspiration which we may get from songs, hymns and poetry; for quiet times, for opportunities to escape constant noise and motion; for greenery – trees, bushes, flowers, field of green, the countryside; for Sundays, for the regular reminder that we need at least one day a week to set aside time for rest, worship, and meditation.

Thanks to all who came alongside and brightened Ken’s days, including Ashley, his singing partner and Sasha, who founded and led Circle of Music which he so enjoyed (pre-pandemic) as with his singing in Sunnyside’s day program at University Gates. No doubt Ken will be singing now, free at last, as he travels home to loved ones and to “meet his pilot face to face”.

Ken’s designated charities include the Waterloo – Wellington CMHA and MCC and may be arranged by contacting the Erb & Good Family Funeral Home at 519-745-8445 or www.erbgood.com.

Share Your Memory of
Kenneth
Upload Your Memory View All Memories
Be the first to upload a memory!
Share A Memory