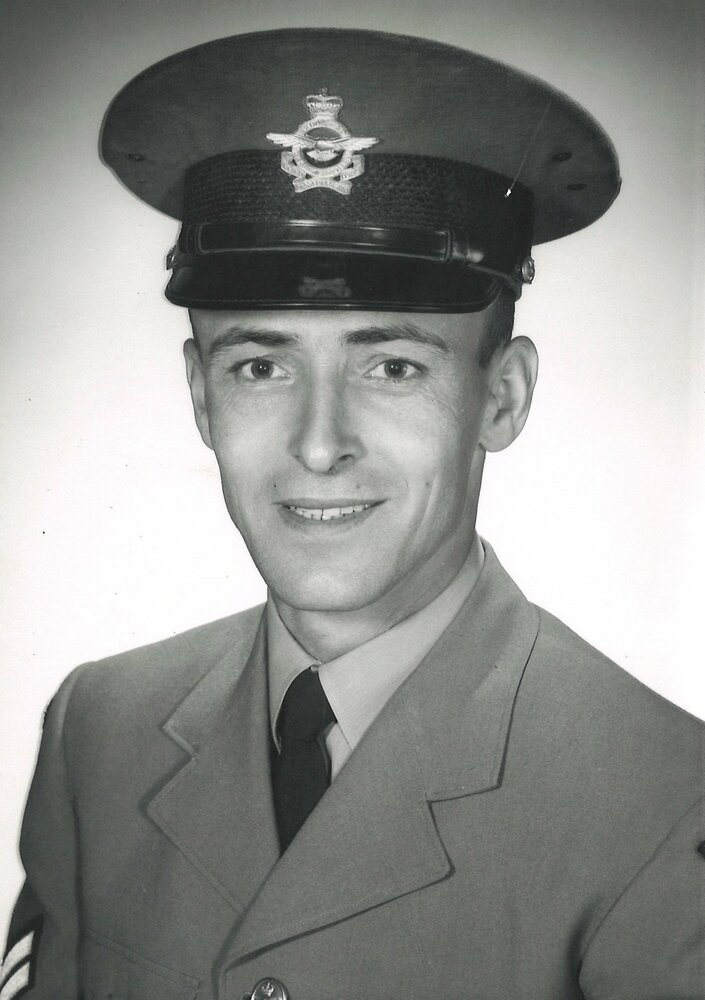 To RSVP to the Celebration of Life, please click here.

A Celebration of Life is planned April 22nd, 2-4pm at the Erb & Good Family Funeral Home in Waterloo. To attend, please register with the funeral home at www.erbgood.com or 519-745-8445.

On November 8th, 1956 Gene married his sweetheart Mimi (Mary Margaret Delagarde) in Dalhousie, New Brunswick and they were together until Mimi’s passing in 1992.

Gene served 23 years in the Royal Canadian Armed Forces spending time in France and on several Canadian military bases. After retiring from service, he worked 28 years for Coca Cola in Kitchener.

Gene had always dreamed of returning to France where he had served in the RCAF. That dream came true when between 2011-2013 his son Derrick accompanied him on three trips back where they visited France, Belgium, Germany, Luxembourg and England.

Up until the last year or so, Gene loved his daily walks where he’d grab his decaf and his lottery tickets. His health declined during the pandemic and he was moved into a palliative care home for the remainder of his life.

He loved watching sports, especially the Toronto Maple Leafs and the Detroit Tigers. He was also a news junkie and thoroughly enjoyed game shows. He loved traveling back to the Maritimes and did so many times over the years. He spent most of his life in Ontario, having lived in Ottawa, Sudbury, Dundas, London and Kitchener.

What Gene loved more than anything was spending time with his family that included 6 children, 10 grandchildren and 11 great-grandchildren.

Gene was loved by many, and though he had little patience for “idiots” when he was in a bad mood, he was funny and charming to anyone who met him. He was known to disappear while shopping (he hated waiting around), he was extremely particular about his clothing choices, and he had a bizarre habit of the mispronunciation of common words, much to the delight of some of his children. He was very social and the Covid pandemic was extremely difficult for a man as outgoing as he. When he was forced by his declining health to slow down, he was well taken care of but missed the hustle and bustle of the busy life he was happiest in.

He was preceded in death by his parents, his beloved wife Mimi, his siblings: Charles, Lucy, Cecile, Annie, Hubert, Louis, Eva & William and his son Dana, in 2020.

He will be sadly missed and always remembered by his loving family. Farewell to the best dad and grandpa.

Share Your Memory of
Joseph
Upload Your Memory View All Memories
Be the first to upload a memory!
Share A Memory