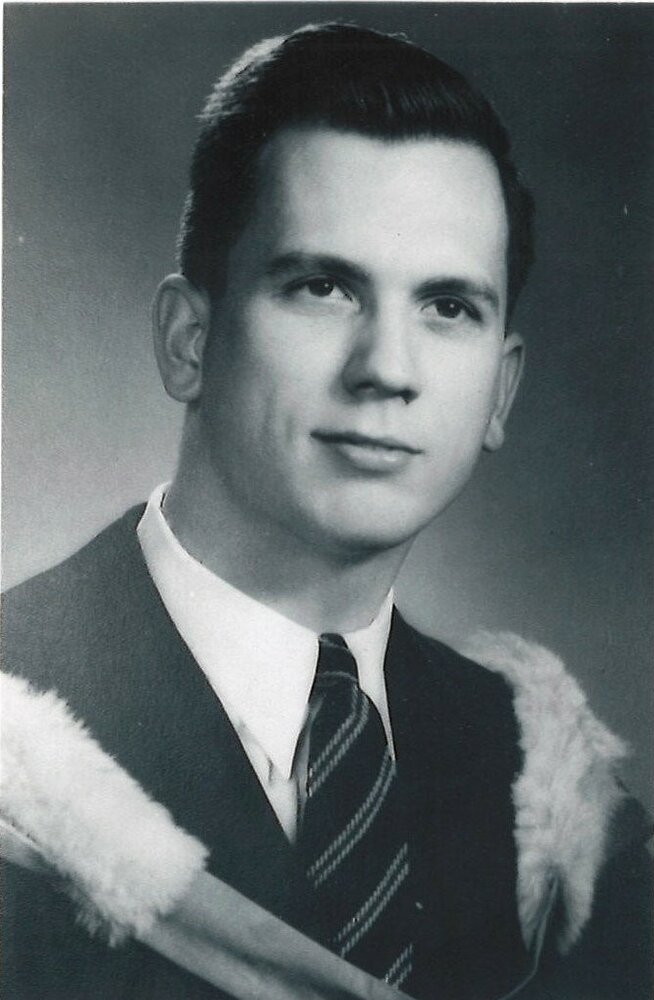 Make Donation
Share this Tribute:
Share Obituary:
Share Your Memory of
Dr. William
Upload Your Memory View All Memories
Be the first to upload a memory!

To view the livestream of the service, please click here and select the Live Streaming tab on the right hand side.

Dr. William Neil MacEachern of Waterloo, in his 90th year, left this world on Thursday March 24, 2022 with his wife of 63 years, Merle, and his daughter Martha by his side at his home in the Village at University Gates.  Known to those closest to him as “Geesh”, Bill was a fiercely loyal and caring friend, colleague and family man.  He was an eternal optimist and radiated that positive spirit in every word and every action.  He found joy in the simplest pleasures endearing himself to all those whose lives he touched.  He will be missed dearly by Merle (Patterson); children Martha (Jeff Freund), Sarah (Phil Kaufman); his grandchildren Madelyn, Emily, Katie, Becky and Matthew; his niece and nephews, Ann (John Serpa), Neil (Gwen) and Iain Lamont; and his beloved grand dogs Roscoe and Higgins.  He was predeceased by his parents Bessie (Mullin) and Neil A MacEachern and his sister Dorothy (Bob Lamont).

Dr. Bill as he was also fondly known, graduated from the University of Toronto in 1954, BSc – Pharmacy and 1958, MD.  Following an internship at Toronto General Hospital (58-59) he and Merle moved to Hanover, New Hampshire where he completed his Dermatology residency at the Dartmouth Hitchcock Medical Center (60-63).  Dartmouth held a special place in Bill’s heart and he returned regularly for school reunions and events.

Bill opened his dermatology practice at 307 ½ Lancaster Street in Kitchener in 1964 (the first of several locations) and served the Kitchener-Waterloo community for 53 years before fully retiring in 2017.  Bill served as the President of the Canadian Dermatology Association in 1989 and was recognized by his peers as the “Practitioner of the Year” in 1984.

Beyond his passion for his craft, Bill was an active member of St. Andrew’s Presbyterian Church in Kitchener, ON and was one of the founders and the second President of the Knox Former Residents Association (KNOXFRA) at Knox College – a Presbyterian Theological College at the University of Toronto (U of T).  During the 170th convocation of Knox College, Bill was recognized with a distinguished leadership award.  Bill lived in the Knox College Residence from 1950-1957 while he studied pharmacy and medicine at U of T.  Bill remained an active member of KNOXFRA and continued to promote and build relationships among former residents through a variety of events and functions.

A true Scotsman, Bill was never one to pass up a bargain and was always on the hunt for the best deal.  Just ask his fellow travellers on a Drayton Entertainment Travel Club bus tour to Branson, Missouri about the “Christmas Tree Caper”!  Merle and Bill regularly attended Drayton Theatre performances and enjoyed many memorable excursions with the Travel Club.

Spending time with the family at the ski chalet in Ellicottville, New York and on the slopes of Holimont was a favourite winter pastime for Bill.  Not to mention his many border crossing stories!  If he wasn’t skiing, he was puttering around the property or in the basement workshop or honing his BBQ skills.  The Sunday morning ski class with his fellow ROGUES (Retired Old Guys Undertaking Extreme Skiing) was a highlight of each weekend for over 25 years.

Golfing in the summer, swimming in the backyard pool every morning, organizing his two “George Costanza” wallets, nodding off to sleep in the theatre for the premier of Star Wars (much to the dismay of daughter Martha), enjoying “happy hour scotch” (and the more than occasional aperitif), labelling everything – and we mean everything!, his love for the Boston Bruins and the Toronto Blue Jays, his curiosity, his ability to continue a phone conversation long after his initial closing commentary, his commitment to his Pharmacy 5T4 classmates and over 60 years of organizing annual reunions, all of these are just some of the aspects and stories that made Bill truly unique.

We would like to thank the amazing staff and fellow residents of the Village at University Gates for their kindness, love and support. A celebration of Bill’s wonderful life will take place on Saturday, April 2 at St. Andrew’s Presbyterian Church, 54 Queen Street N., Kitchener, ON, with visitation beginning at 11:00 am and a memorial service at 1:00 pm.  A mask requirement remains in effect and all in attendance must provide proof of double vaccination for COVID 19. The service will be live streamed.  Please visit https://www.standrewskw.com/ and click on the Live Streaming tab on the right hand side. In lieu of flowers, donations to KidsAbility or a charity of your choice would be appreciated by the family and can be arranged through the Erb & Good Family Funeral Home at www.erbgood.com or 519-745-8445.

11:00 am - 1:00 pm
St. Andrew's Presbyterian Church
54 Queen Street North
Kitchener, Ontario, Canada
A mask requirement remains in effect and all in attendance must provide proof of double vaccination for COVID 19.