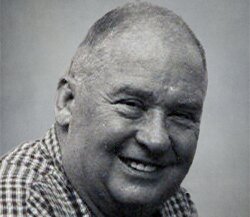 Passed away peacefully at Grand River Hospital - Freeport Campus, Kitchener, on Sunday, March 27, 2022, at the age of 91.

Dear husband of the late Mary Elizabeth Christopher (2017), cherished and loving father of Rob (Jennifer), and Doug (Beth). He will be fondly remembered by his grandchildren Ash (Jenna), Sean (Andrea), Evan (Michelle), Liam, Kinzie and Jordyn, and great grandchildren Alice and Sydney.

Ken was predeceased by his parents Arthur and Emma (nee Burgall) Christopher, as well as brothers John, Rob and sister Betty.

Kenneth Christopher was born in St. Catharines, Ontario April 10, 1930. He graduated from Waterloo Lutheran University (WLU) with a Bachelor of Arts Degree and later received a Master’s degree in Education from New York State University (Buffalo). He met Mary Elizabeth Robinson at a YMCA dance and after a whirlwind courtship they were married on October 20,1951. Ken and Mary Elizabeth celebrated their 66th anniversary Oct 20,2017.

After graduation he began his career at the YMCA in Niagara Falls Ontario and rose to the position of General Secretary. He also had a professional wrestling career to earn extra money and performed in the local Buffalo and St. Catharines arenas (under the ring name “Killer Christie”). In 1964, an old university friend called and asked him to join his land development company, Major Holdings as Executive Assistant to the President. While at Major Holdings one of his lasting legacies was naming all the streets in what is now the Upper and West Beechwood communities. After Major Holdings was sold and taken public he and Mary Elizabeth built a successful Amway business together achieving the level of Diamond Distributor and continued working in the business until retirement. He was a contributing member of the Rotary club of Kitchener Waterloo, and with Mary Elizabeth loved to travel to places like Spain, Morocco, Hawaii and the Caribbean. Their dream was to spend their winters in Florida and for many years had a house on a golf course in Bradenton Florida.

At Kenneth’s request there will be no visitation. The funeral service will be held in the chapel of the Erb & Good Family Funeral Home, 171 King St. S., Waterloo on Friday, April 1, 2022 at 3:00 p.m. Cremation will have taken place. A reception with family will follow immediately after the service in the Fireside Reception Room of the funeral home. The service will also be live streamed at www.erbgood.com on Ken’s tribute page and will remain on the funeral home website for future viewing.

Condolences for the family and in lieu of flowers donations may be made to Grand River Freeport Hospital https://grhf.ca/pages/donate-care-area or by contacting the funeral home at www.erbgood.com or 519-745-8445.