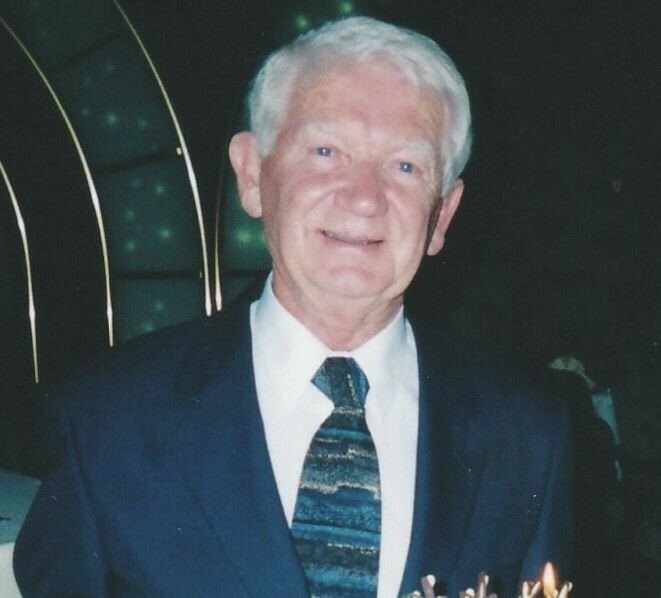 On Wednesday, April 20, 2022, Edwin (Ed) Flegel passed away at the Freeport Campus of Grand River Hospital in Kitchener, Ontario after a long battle with cancer. Ed was in his 92nd year and 67 of those years were spent with his loving wife May Flegel, who passed away a year earlier on March 6, 2021. Ed was father to four children Michael (Phyllis), Jeannette Boak (Peter), Brian (Judy) and Susan Cooper (Tim) who will miss him forever. Ed also leaves behind his grandchildren Kellen, Kevin, Eric, Kyle and Bryan and great-grandchildren Jeffery and Violet. Ed also leaves behind siblings Bob (Barb), Irene and Marg and was predeceased by Jack, Dan, Tony, Millie and Rosie.

Ed met May on a sunny summer day at Lakeside Park in Oshawa in 1952 and from all accounts it was instant. They soon discovered their love of dancing and that they wanted nothing more than to be together. They married in 1953 and started their journey on a wonderful life working hard to build a house and home, raise a family and provide for them.

The family years were marked by memorable Christmases, parties, gardening and watching their children grow. Once all the kids had left to find their own adventures, Ed and May began to travel especially after Ed took early retirement from General Motors in 1988.

Ed loved to garden, work on crosswords and was a voracious reader. Starting in the 1960’s, he was an usher at the Oshawa Civic Auditorium which he truly enjoyed but his greatest pleasures were singing with May in the County Town Singers and taking the family on trips to the beach, camping and whatever we could do as a family. We – his children – fully understand how important that was to him and to us.

Ed was someone everyone loved and he lived the definition of what a ‘nice man’ should be.

Cremation has already taken place and a private memorial service will be held at a later date. Condolences for the family and donations to the Canadian Cancer Society can be arranged through the Erb & Good Family Funeral Home, 171 King St. S., Waterloo, www.erbgood.com or 519-745-8445.

Ed’s family would like to express their appreciation to the palliative care staff at Freeport Hospital for the care provided.

Cremation has already taken place and a private memorial service will be held at a later date.