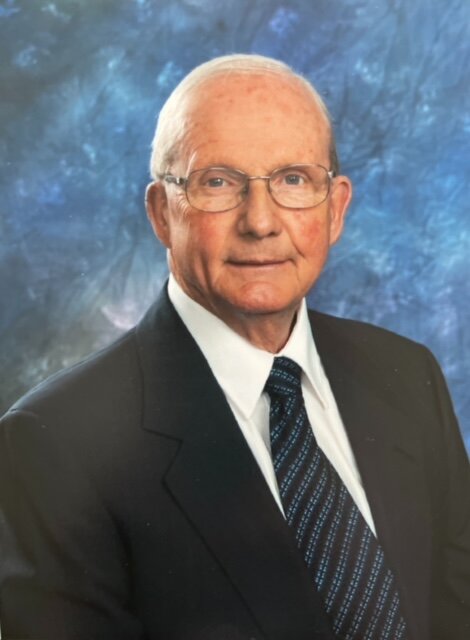 It is with great sorrow that we announce the passing of our beloved husband, father, grandfather, great grandfather, brother and uncle, John Peter Sprung, on June 7, 2022 in his 84th year. Peter Sprung was born on September 28, 1938 in Kitchener, Ontario, the third of six children to Lyall and Doreene Sprung.

Peter attended high school in Kitchener, followed with a degree in Electrical Engineering from the University of Toronto through the Regular Officer Training Plan (ROTP). Peter and Dorothea (Dee) met at University and were married the same week they graduated, on June 3, 1961. The newly married couple moved to Halifax, Nova Scotia where Sub-Lieutenant Peter Sprung embarked on his naval career by serving on the HMCS Terra Nova. First daughter Jennifer was born in Halifax in March 1962.

Peter and Dee returned to Waterloo in 1964 where Peter earned a Masters Degree in Mathematics from the University of Waterloo. Second child Ronald was born in Kitchener in February 1967.

Peter and Dee then moved their young family to Winnipeg where Peter commenced a career in the computing department of Air Canada. Third child Laura was born in Winnipeg in August 1969. It was in Winnipeg that Peter discovered his lifelong love of fitness and running.

Peter accepted a position with the Computer Science department at the University of Waterloo. The family moved into 5 Pittsford Close in Waterloo in summer 1971. Fourth child Gordon was born in January 1972 and the family was complete. Peter wryly observed that every move seemed to result in another child and as a result this remained the family home for 46 years.

Peter spent the rest of his working career at the University of Waterloo, where he served as Computer Operations Manager in the Computer Science Department and also took great pleasure in passing on his joy of mathematics to generations of calculus students. Peter was recognized for his expertise in software copyright law which he used to contribute to the success of a software company after retirement.

Peter had an active life outside of work. He ran or skied every day on his lunch hour with life-long friends including Mike, Jay, and Howie. Peter and Dee discovered camping and took the family to Banff, Yellowstone, and Newfoundland among many places. The family’s favourite local camping spot was the Pinery. Later in life, they took on the challenge of canoeing in Killarney and Algonquin parks. Peter and Dee loved travelling and had many great adventures, including Australia, New Zealand, and a trip down the Nahanni River to name just a few. Peter and Dee took all 4 children and their families to a resort in Muskoka for their 40th wedding anniversary, and on an Alaskan cruise for their 50th anniversary, creating lifelong memories for all.

Peter’s intelligence showed in both his work and personal life. He loved games and was highly competitive, especially in his monthly “Probability Seminar” (aka poker). Peter was active in the community and served on the Gyro Club and KW Symphony Board. Peter and Dee loved the symphony and were active supporters and volunteers for decades. Peter took up the trombone in high school and then carried on playing it throughout his life, joining the Kitchener-Waterloo Band and torturing his children with early morning practice sessions.

Friends and family are invited to celebrate Peter’s life at Erb & Good Family Funeral Home at 171 King Street South, Waterloo, Ontario. Visitation will take place on July 3 from 2:00 to 4:00 pm and 7:00 to 9:00 pm. A final visitation will take place on July 4th from 10:00 to 10:45 am, just prior to the service in the Erb & Good Chapel at 11:00 am. This will be followed by a light reception, and an interment at Parkview Cemetery. For those unable to attend in person, the service will be livestreamed.

In lieu of flowers, donations can be made to the Kitchener-Waterloo Symphony and can be arranged through the funeral home at www.erbgood.com or 519-745-8445.