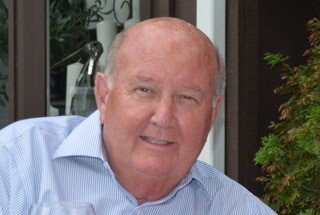 After a short battle with pancreatic cancer, Gary passed away peacefully on Monday, November 4, 2019 in his 81st year.  He was born in London Ontario to Ed and Audrey Boug; the first of 10 children.

He will be dearly missed by his siblings, Barb (Ray), Donna (Bob & Lou), Diane (Barney), Carol (Frank), Linda (Gerry), Suzanne (Tom), Bob (Barb), Bill (Janice), Brad (Megan) and their families. He was married to his best friend and the best thing that ever happened to him, Martha, for 57 years.  Together, they created their own family of two sons: Scott (Patti Miller) and Rob (Tamiko Ho-Shing). His grandchildren Trianna, Talia, Tyra and Riley filled his days with love and laughter.

In 1962 he began his career in education and immediately loved it and the life-long friends he made.  Gary finished his last 12 years, as a proud principal at Grand River Collegiate Institute. Sports remained a passion for Gary throughout his lifetime. He played both football and basketball at the University of Western and was inducted into the Western Hall of Fame in 1993.  In addition, the 1957 Beck Collegiate basketball team that Gary played on was inducted into the London Sports Hall of Fame. He was a proud member of the University of Waterloo football coaching staff in the early 80’s.  Sports were a part of Gary’s life in so many ways.  There was always a game on tv, a play in discussion or a pool pick being called in.  Volunteering for various foundations was constant during his retirement years.  He lived his mantra "Reach out and touch somebody's hand and make it a better world if you can".

Funeral will be held on Saturday, November 9, 2019 at 11 a.m. at Trillium Lutheran Church, 22 Willow St. Waterloo. Reception to follow at the church from 12-2 pm. Condolences for the family and donations to Innisfree Hospice (Kitchener) in lieu of flowers can be arranged by contacting the Erb & Good Family Funeral Home, 171 King St. S, Waterloo at www.erbgood.com or 519-745-8445.

Reception will follow the service in the church hall.

Share Your Memory of
Gary
Upload Your Memory View All Memories
Be the first to upload a memory!
Share A Memory
Send Flowers