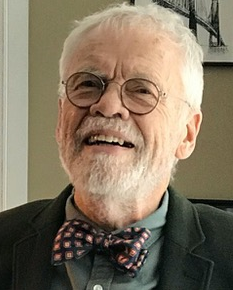 Stanley Karl Johannesen died at his home in Waterloo, Ontario on January 8th, 2020 after a long illness bravely borne. He was born in Brooklyn, New York City in 1939 to Olav and Elsie Mae (née Bumbaugh) Johannesen. His father was a Norwegian immigrant and his mother was from Pennsylvania. Stan emigrated with his own young family to Canada in 1969 where he joined the History Department at the University of Waterloo, teaching there until his retirement in 2004. Stan was the beloved husband and soulmate of Penny Winspur and the loving and proud father of Christopher (Kristen), Benjamin (Cathy), Jennifer (Carsten Knoch) and John Johannesen, and gracious stepfather to Simon (Peggy Egan) and Benjamin Howard (Irena). His six grandchildren, Kate, Luke, Matt, Owen (deceased), Angus, Eva, and his six step-grandchildren, Ethan, Mark, Alexander, Jessica, Miranda and Anna will miss his gentle disposition, his funny and interesting tales and his willingness to listen and offer sound and always kind advice. Stan is survived by a sister Joyce (Latif) Lighari, and his well loved brother LeRoy, and Roy’s wife Gloria and their children, Dawn and Heidi. Stan was an extraordinarily learned man, who was always interested in his students, taking a progressive, collaborative and often unorthodox approach to his teaching, leaving a lasting impact on many of his students. After retiring, he helped establish a small literary press and became its senior editor, wrote five novels, and plunged with much gusto and delight into the science of food and cookery — for which his wife will be eternally grateful! He also wrote a blog of small, perfectly crafted essays ranging over questions of art, philosophy, religion, literature, actually anything that took his fancy, usually provoking a smile and always a moment for reflection. Stan was deeply curious about and influenced by his Norwegian heritage, delving into family history, places and events, which inspired much of his work over the years. He will be sorely missed by family and friends. Stan’s family would like to offer heartfelt thanks to the people — nurses, doctors, support staff who work for the Hospice of Waterloo region. They were splendid. Their unfailing good humour and simple, uncomplicated empathy and care made Stan’s last months much more tolerable. Thank you. A private family celebration will be held at a later date. At Stan’s request there will be no visitation or service, however, his family welcomes donations to Hospice of Waterloo Region, which can be arranged through the Erb & Good Family Funeral Home, 171 King Street S, Waterloo at 519-745-8445 or www.erbgood.com. “To every thing there is a season, and a time to every purpose under the heaven:” King James Ecclesiastes 3:1